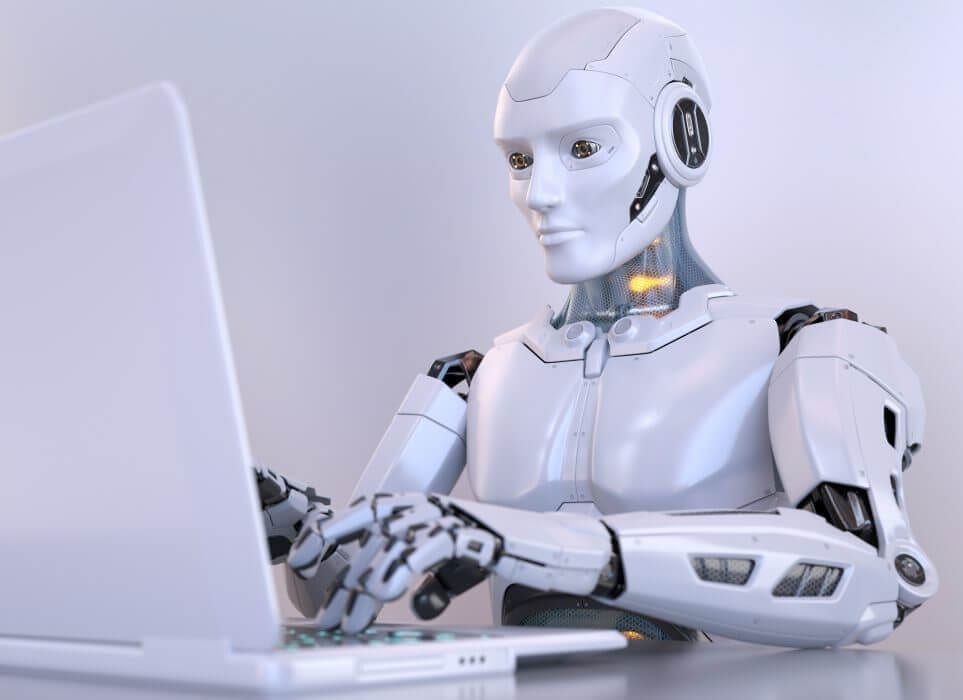 Artificial intelligence is the term used to describe the advance of computers and machines to the point where they seem to be reasoning without input or extrapolating information based on incomplete data, by using traits usually thought of as human: abstract thinking, emotional responses and appreciation of aesthetic or artistic tendencies.

As a research discipline artificial intelligence (also called ‚machine learning‘) began in 1956. Five attendees at a workshop at Dartmouth College became the forerunners of AI programming: Allen Newell, Herbert Simon, John McCarthy, Marvin Minsky and Arthur Samuel all posited that with the application of a comprehensive enough mathematical formula (algorithms and so on) machines could be programmed to respond to stimulus, and when faced with an unprogrammed variable would have the resources to devise a solution without needing more data.

They began by teaching computers to play checkers or draughts as the game was simple, with easily defined rules and strong adherence to logical outcomes. Within a very short time, the computer was ‚learning‘ from each encounter, adapting gambits and moves to counteract those previously used against them.

It must be mentioned, however, that the beginning of the research discipline was based on ideas and discussions that had been around since Alan Turing posited the thought in the 1940s. Hence the Turing Test being the benchmark for successful AI-human interactions.

The issues faced by pioneers in AI mainly revolve around the fact that the processes behind human thought was then not largely understood. Even today, when we understand much more about the processes: physical, electrical and even emotional, behind thoughts and understanding, we are at a loss to precisely define what a thought is and how to replicate it.
Reducing everything to numbers – even to binary – gave these early AI scientists a platform on which to start out and this has stood the industry in good stead as the mathematics has advanced along with the technology.

The difference between a regular computer interaction and one that demonstrates artificial intelligence is when the computer reaches the limits of their programming and adapts previous experiences adding logical thought and probability to arrive at a reasonable ‚estimated‘ outcome.
For example: the data is fed into the computer that house prices have gone up every year, except the beginning year of each decade at which point it falls thirty percent (for reasons unknown to the computer or those programming it).

Variables are added in: political upheaval, natural disasters, the general zeitgeist. Then, the data is filled in for the current year, and the computer is asked ‚how will prices perform next year?‘ The computer will take all the available information, and will extrapolate a reasonable estimate of house prices. Should the following year end with a zero to indicate a new decade, the computer will allow for the usual thirty percent decline, even though little else indicates that this will happen.

Of course, this is a massively simplified description of AI processes, but it serves to show how the computer uses what might be called memory (past events) along with experience (current data) to arrive at logical conclusions. These mathematical steps are now so advanced that computers can ‚write‘ unique texts based on certain authors‘ style or set in certain locations.

The Future of A.I.

Perhaps more so than any other technology, A.I has the ability to transform our world beyond the scope of our imagination.

The speed at which A.I. has disrupted traditional industries over the last twenty years is staggering, and thanks to the constant loop of data being used to improve A.I., the rate of change is increasing with every passing year.

As celebrated author Ray Kurzweil puts it, “By the 2030s, the nonbiological portion of our intelligence will predominate.” In other words, the capacity of Artificial Intelligence to make key decisions in areas like geopolitics, government policy, and environmentalism, will overtake that of humans.

Some prominent A.I. theorists such as Elon Musk go even further, claiming humans will supercharge their brains with AI-based neocortexes, with potentially catashtophic consequences.

London: Home to the AI Boom

One might expect Silicone Valley to be home to the growth of AI businesses, but in fact the spiritual home of AI is in the heart of London.
Silicone Valley is a great place to go if you want to innovate with hardware and even software and app programming, but there seems to be an almost superstitious reluctance to engage with artificial intelligence in any except the most limited ways.

London has long been an aspirational destination for creative thinkers and entrepreneurs, and the field of artificial intelligence is open for exploration by both of these groups.
It has often been said – and is turning out to be nothing more than the truth – that this year’s school-leavers will be earning their living at jobs that have not been thought up as yet.

This is particularly true of AI work, as the field expands into other industries, raising questions that will need to be answered and requiring human input that is, as yet, an unknown quantity.
Young creative and business-minded people do not always know exactly what they want to do with the rest of their lives, especially in today’s shifting world, where the economy is volatile and technological advance transform our lives from one day to the next.

Therefore, they come to London, to see what opportunities there are: in this way they learn about innovations and inventions that perhaps spark tremendous interest or ideas for products that are sure to become the next big thing.

Industries Being Transformed by AI

You may not realise it but the growth of tailored advertising on social media is largely driven by artificial intelligence. These companies use cookies to ’see‘ what consumers are looking at, and how long they spend on particular product descriptions.

For example, say you need a new printer, one with scanning capability. So you search for these items online, ignoring any that do not have an inclusive scanner. The next time you go onto your social media page, suddenly all you have is advertisements for printers with scanners (unless you have opted out of ad-tracking).

This is because the computer has ‚realised‘ that you are in the market for one of these items, and is flagging any entries that seem to match your requirements.
This is a long way from impersonal advertising when teetotal people would see alcohol adverts, tea drinkers would be pushed to buy coffee, and city dwellers would receive ads targeted for farmers, all alongside adverts for items they could and did use.

Google Adwords and their Analytics package is perhaps one of the best known examples of an AI driven marketing program.

The day of logging in to consult your AI doctor is coming ever closer and for some procedures and tests is here already!
Medical records: medical records are, for the most part, digitised already. While this makes life easier for doctors, nurses and medical administrators, it also means that artificial intelligence can be set to run routine maintenance on patient files. This can help to flag up issues with patients who have multiple prescriptions as sometime medications can interact badly with each other – it is easy for human doctors to overlook a clash if the patient is very ill and needs a lot of medications, but a computer will effortlessly see the contraindications and draw it to the attention of the doctor.

Tests and diagnoses: Much of what a GP does all day involves examining patients and ascertaining if they are actually ill or if they are perhaps mildly undernourished, dehydrated or stressed – all of which can induce similar symptoms to some ailments. Occasionally a blood or urine test or a throat swab is needed to pinpoint a diagnosis before treatment can begin. All of these tasks could be completed by a machine who could advise patients to drink more water or that the doctor will be in touch with the results of their test. This will free up the doctor to give more time and consideration to the test results or to examining those patients who cannot be triaged out by the machine.

Surgeries: surgeons are already using artificial intelligence-assisted robots in the most delicate surgeries, such as brain operations in which the slightest mistake, even of a fraction of a millimetre can make the difference between success and disaster. The AI input helps to steady the doctor’s hands, minimising the minute involuntary movements and resisting any sudden movements that might harm the patient. AI can also help by dramatically magnifying or minimising aspects of the surgery, so the doctor can move their hand several centimetres, but the scalpel will move only a few millimetres. This allows for highly delicate, precise surgery that would not otherwise be possible.

Babylon GP is a London-based ‚digital care provider‘ that is already working for the NHS. They are expanding into the North-west of England and should their successes continue, they will probably extend their services across the whole country and further afield.

Teachers, like doctors, spend a fair amount of time deciding if a child has educational issues, emotional distresses or are simply having a bad day, and this can take a lot of time. Artificial teaching assistants can help to pinpoint issues, feeding them up to the teacher who can then put a learning plan in place or intervene in other ways as deemed necessary. Autistic children who have issues with socialisation or who reject physical contact often get on better with more impersonal robots who never become offended or tired of answering the same or very similar questions over and over. This actually can help the child to become more social, as the AI can explain concepts like sharing and ‚good‘ behaviour in a way that does not make the child feel guilty or bad.

LuxAI is a company that has created a small friendly autism-friendly teaching robot that is making great strides with children who have special educational needs. They are based in Luxembourg.

AI has been subject to several waves of interest over time, with expectations that were unfulfilled, put aside for a while, and then dusted off again when the technology and ideas matched up once again. As we are currently cresting an immense wave of technological advancements that has lasted the last forty or fifty years so far, now is the moment for AI and London to make their mark on the world.

If you work at an innovative UK-based A.I. company, you could be eligible for R&D tax relief. Get in touch now for a free assessment of what you could be owed by HMRC.